The Great Recession is still in our rear view mirror. The downturn began over a decade ago, but it’s only within the last few years that the economy has come fully back to life—albeit less so for certain communities, particularly those in rural areas.

But to see how the Great Recession continues to affect us today, just look at the way millennials—America’s largest generation in the U.S. labor force, with some well into their 30s—approach the concept of entrepreneurship.

Entrepreneurship is one of the foundations of the American economy, if not a central part of the collective American psyche. And yet, according to the 2019 Millennial Entrepreneurs and Money Report from the team at Fundera, rates of entrepreneurship for those born in the 1980s and early 1990s is well below other generations, including now retirement-age Baby Boomers.

Only .22% of millennials start new businesses in any given month, compared to .37% of baby boomers. And when baby boomers were younger, they were more likely to become entrepreneurs than millennials are today.

Millennials are lagging behind older generations in terms of their willingness to start a business, and even trail post-millennials in terms of business revenue and much of it has to do with coming of age during the economy’s greatest contraction in the post-World War II era.

The average personal credit score for millennials is 699—more than 20 points lower than that of Baby Boomers. This may be due to the fact that millennials carry, on average, just as much debt as older generations do, despite having had less time to rack up that debt. The greatest source of millennial debt? Education loans. 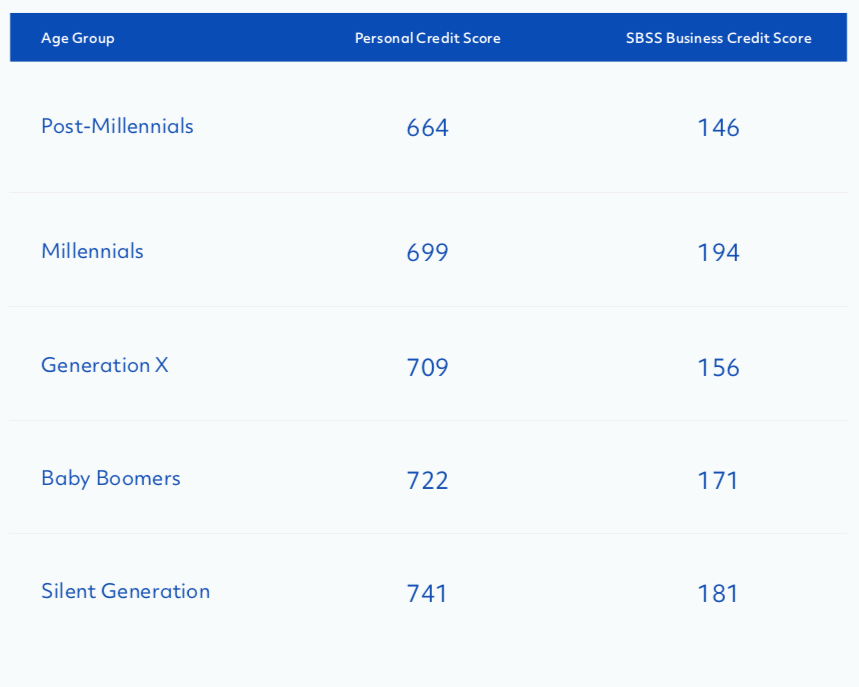 Personal credit scores play a major role in a person’s ability to acquire affordable financing to start or grow a business. Without that access to capital, millennials are likely reticent to take on the risk of starting their own business.

And although some millennials are undoubtedly unwise with their money—as are we all—evidence points to them actually being more astute financial planners than previous generations: Their business credit scores are markedly higher than those of people from Generation X (whom they beat by almost 40 points) and Baby Boomers (23 points).

Millennials’ “do-it-myself” mentality may not lend itself to entrepreneurship

According to a recent Merrill Edge report, millennials tend to want to take their financial matters into their own hands, not relying on others as they pursue financial independence.

You might think that wanting to “DIY” everything would make millennials more interested in starting their own businesses, not less. But their concern with long-term financial stability makes them less likely to take on the risk and debt that a startup loan—be it from a bank, online lender, or even friends and family—would require.

Millennials are taking conservative approaches with their finances

Undoubtedly scarred by seeing how risk can backfire after the bubbles burst in 2007 and 2008, millennials are taking slow, deliberate approaches to building up both their personal finances and their businesses.

According to the Millennial Report, millennials’ businesses are being outperformed from a revenue standpoint by businesses from every other generation, including post-millennials. That’s because many millennials have been on an uphill climb since they graduated from school, and as a result they are more conservative and tend to “play it safe.” 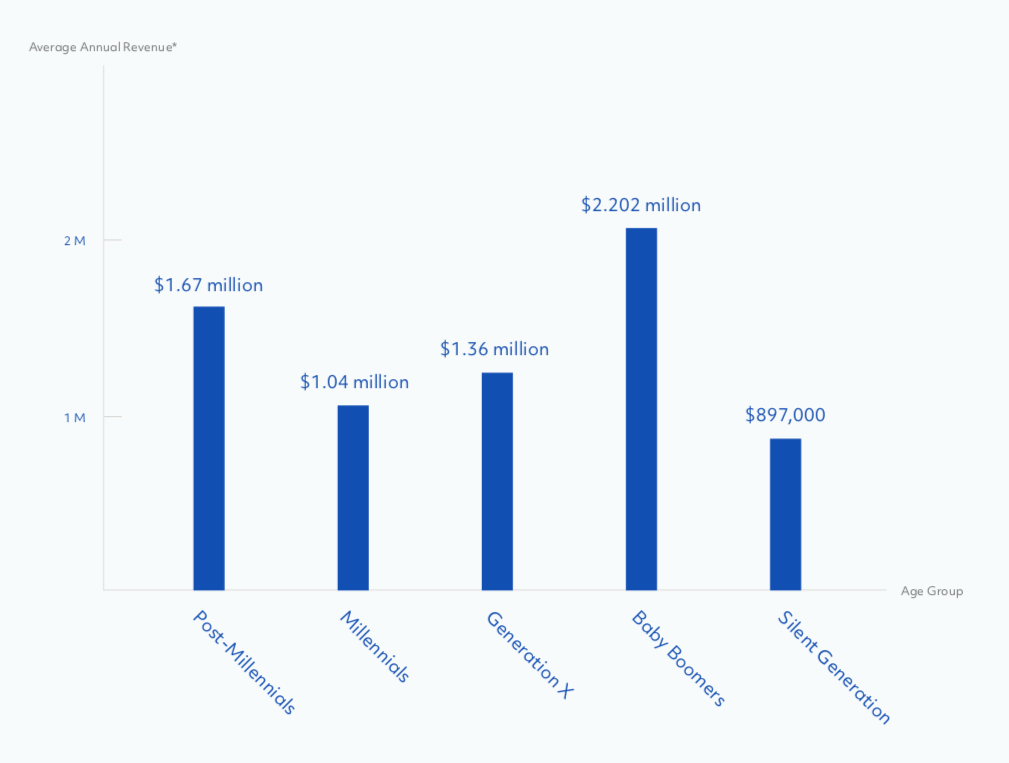 When it comes to business revenues, millennials are not at the top of the pack. Source: Fundera

Additionally, research shows that the majority of entrepreneurs who get started during an economic depression are “qualitatively disadvantaged,” leading to an overall decrease in qualitative entrepreneurship.

Millennials prefer traditional financing, but they receive less of it

In keeping with their more conservative approach to business, millennials generally prefer to use traditional financing, such as business term loans or lines of credit, to tools like business credit cards.

Millennials, however, tend to receive less financing than other generations—$8,515 less than Baby Boomers, on average. Whether that’s because millennials had lower personal credit scores, less upfront capital, and fewer assets to use as collateral, or simply needed less financing for their ventures isn’t clear.

While millennials aren’t paying outsized premiums for that financing, the fact of the matter is they have less to work with than any generation before them. 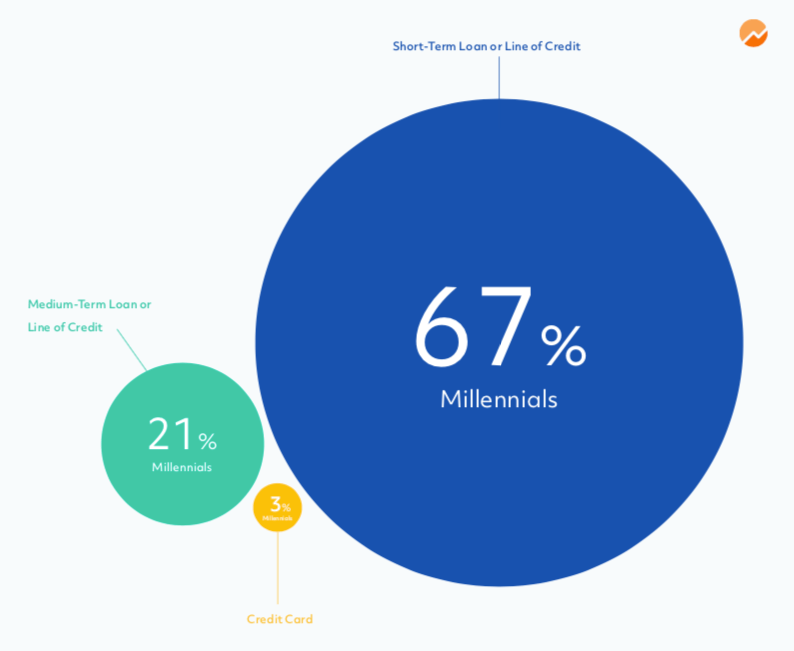 Among millennial business owners who received funding from Fundera in the last year, here’s the breakdown of the products they received. Source: Fundera.

The Great Recession was a financially traumatic event for wide swaths of the American public, across all generations. Some people lost their businesses, others lost their personal savings, and some lost everything. At that point, millennials, many of whom were still coming of age or in school, had less to lose.

Now that the stock market and economy at-large has mostly recovered, however, it appears that millennials lost things that they may never gain back. The recession hit at a crucial time for building personal credit, capital, and opportunity—and millennials may spend the rest of their lives playing catch up. The fact that so many are choosing the security of salaried positions over the risk of starting a business should come as little surprise.

The entrepreneurs that do emerge from this generation are more resilient and assured than they have any right to be, and our report shows exactly why. We look forward to checking back with them in a few years to see which of these trends are temporary dips, and which trends are—for better or for worse—for life.