We spoke with Asher Collins, owner of Big Guy Signs in Indianapolis, about the opportunities and challenges he’s faced as a founder and business owner. In his long and varied career, he’s mastered numerous aspects of the graphic design and manufacturing industry: production and installation, drawing, and customer service.

In this interview, Asher unpacks the business and financial strategies he’s employed to grow his own shop in a competitive industry.

Asher Collins grew up surrounded by business-owning kin. As a boy, he watched his mother run her own restaurant. Two more aunts owned restaurants, not to mention the one who had a flower shop. His uncle owned a heating and air company, and his brother succeeded in the logging industry. Collins, however, never imagined he’d follow in his family’s footsteps.

“I didn’t anticipate owning my own business, it just happened,” Collins admits. He had spent years working his way up the ranks at manufacturing and graphic design shops. Then when his employer closed its doors, Collins knew it was time to follow in his family’s footsteps. “Whether I sink or swim, I’m in,” he says. 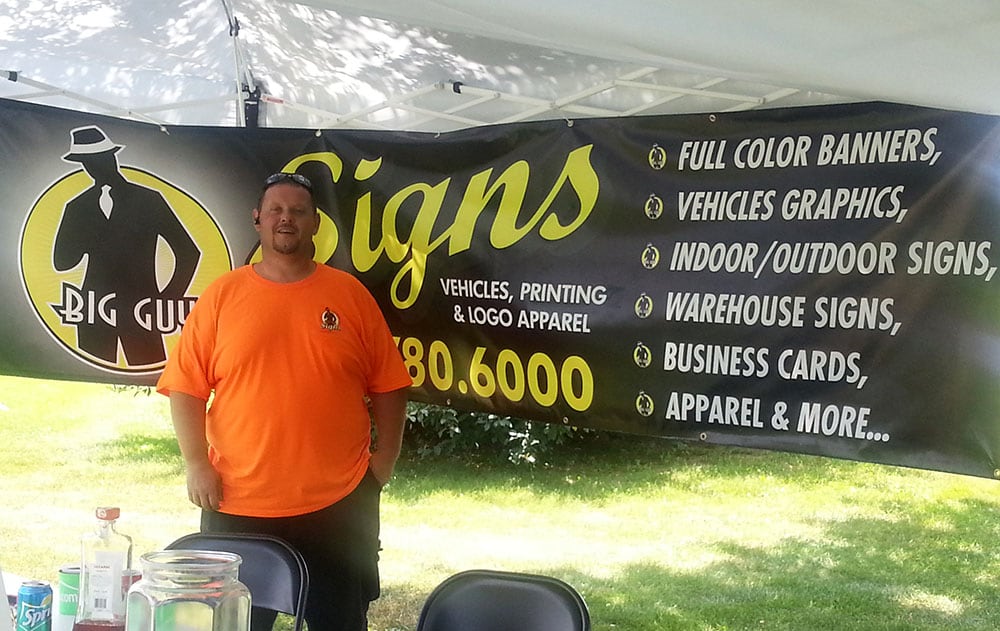 Before starting his own business, Collins spent years working his way up the ranks of sign installation, production, and customer service at other companies around town. His experiences gave him a keen eye for industry trends.

“I’ve been around a long time,” notes Collins. “I know that if you don’t stay current, you die.” Collins pushed Big Guy Signs to get ahead of the digital printing curve, and brought processes in-house. This enabled him to guarantee project schedules and deliver a better product and service to customers.

Yet, Collins couldn’t control one thing: his customers’ budgets.

Indianapolis businesses clamored for vehicle wraps, custom graphics that turn a company’s truck or van into a roaming billboard. Collins had the equipment, but few clients could afford the price tag. “A customer would come in wanting a vehicle wrap, but would settle for something smaller,” he says, “I was making $600 instead of $3600.”

The problem wasn’t just the missed revenue–he was starting to fall behind the competition. “Other shops around me were growing their vehicle wrap business,” Collins remembers.

Yelp lists nearly 90 sign makers in Indianapolis, ranging from corporate names like FedEx and Staples, to independent establishments like Big Guy Signs. If Collins couldn’t satisfy the demand for vehicle wraps, someone else would.

At the same time, Collins couldn’t bankroll every business that came knocking for vehicle work. He had to balance his accounts receivable with cash on hand so he could keep his day-to-day business commitments: purchasing supplies, keeping the lights on, and paying salaries. Because of when his clients cut checks, though, weeks could pass before he got paid for work that he’d already delivered.

“There was a gnawing frustration every day when I’d think, ‘Man, my rent’s due and I got three checks coming in, but they’re due in two weeks,’” Collins sighs. “That frustration of daily business can really get you down.” 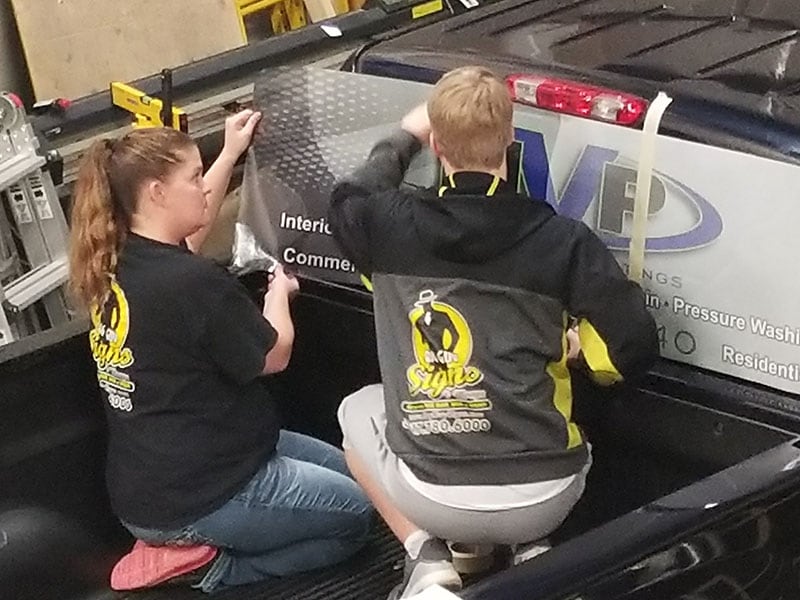 Collins needed a sustainable way to stay competitive. He couldn’t keep “robbing Peter to pay Paul,” nor could he slash prices. Banks couldn’t help him either. “Business was strong, but because my credit wasn’t the best, I couldn’t get a loan,” he explains.

Collins financed his invoices to help with his cash flow, but that didn’t change his customers’ problem: they wanted a vehicle wrap but had to settle for less. He needed a solution that not only helped his business, but that also financially empowered his clients.

Fundbox Pay has opened doors for my customers and secured the way I do business,” says Collins. “I love the fact that I get paid upfront and my customers are happier because they have options–they can get what they want and not settle.”

Fundbox Pay is a credit network for business transactions. With Fundbox Pay, Collins’s customers can get approved for a line of credit and Net-60 terms, which gives them purchasing power. Additionally, when they pay Big Guy Signs with their line of credit, Fundbox advances funds so Collins gets paid right away.

Collins and 11 of his customers have signed up to transact together on Fundbox Pay, generating nearly $60,000 in payments.

“Fundbox Pay has opened doors for my customers and secured the way I do business,” says Collins. “I love the fact that I get paid upfront and my customers are happier because they have options–they can get what they want and not settle.”

It’s exactly the win-win solution that Collins needed to unlock his vehicle wrap services. “I’ve probably grown 60% because of Fundbox Pay,” he estimates. “Vehicle wraps have become a major part of my business.”

To Collins’s pleasure, his customers have learned to use Fundbox Pay on other products as well. “One of my customers started using Fundbox Pay to wrap a truck, but now they use it on shirts, prints, and more,” he notes.

As for the competition? Thanks to Fundbox Pay, Big Guy Signs started snagging business that his competitors once controlled, leaving Indianapolis sign makers puzzled as to what had changed so quickly.

Fundbox Pay, and the ability to offer customers better payment terms, has become a core component of how Collins runs his business.

“Before, I had no options. You make it work or you lose the business–the stress could be brutal,” he says. “Fundbox Pay has been a godsend.” 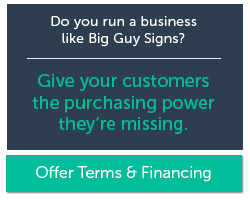 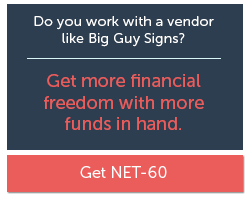 Join the 500,000 businesses that have connected to Fundbox.
Get Started
Tags: Business GrowthCustomer StoriesRunning a Business